PALLAVICI PALACE AS YOU HAVE NEVER SEEN

Pallavicini Palace was built on the tradition of the Bolognese Fifteenth century, when under the Bentivoglio dominion it belonged to the Sala family (1493) then in time was owned by the Volta, the Marsili and the Isolani counts, who in 1680 renovated it “in the senatorial architecture” (cf. Giudicini). They entrusted, the architect, Paolo Canali with the task, who projected and built the monumental staircase and the hall with a lantern shape ceiling, the highest of the city together with the one in Ranuzzi Palace, whereas in 1690 the halls were embellished with Giovanni Antonio Burrini’s paintings. 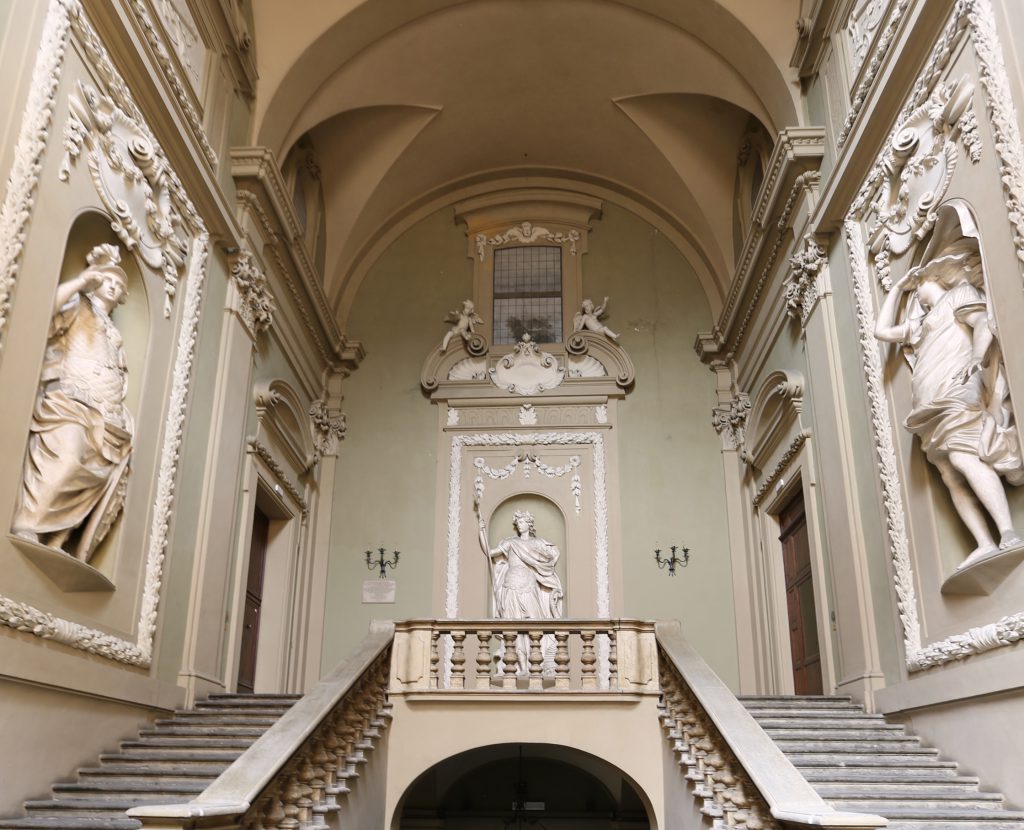 The palace was then chosen as the residence for his prestige by the marshal Gian Luca Pallavicini (Genoa, 1697-1773), captain and minister in the empire of Carlo IV of Hubsburg and his daughter, the Empress Maria Teresa of Austria, mother of Marie Antoinette Queen of France who was beheaded during the French Revolution. The count arrived in Emilia in the mid Eighteenth century, he was in search of a setting where he could renew his past glories in Palazzo Reale as Viceroy of Milan and the opportunity came in 1765, when senator Ferdinando Bolognetti, owner of the palace in Via San Felice at the time, left for Rome and rented it out. With Pallavicini, the building become center of a European court, offering a view worthy of a Royal Palace: the Genoese settled relations with international diplomacy, he prepared events and banquets, organized concerts, he housed crowned heads and memorable was the parade which took place along the staircase in 1764 during the “Gonfaloniership Entry” for Senator Davia, “Peerage of Scotland” and Chamber Gentleman of the Duke of Modena, when the most notable people of that time descended the monumental staircase among torches and music to celebrate the Senator offering a breathtaking sight to the city.

MOZART AT THE PALACE

In Burrini hall which was lit to celebrate the evening of march 26, 1770, the fourteen year-old Wolfgang Amadeus Mozart, guest of the Count Marshal with his father, performed in the presence of seventy ladies and of the European high aristocracy: the count Giuseppe of Kaunitz Rittber and princes of Holstein and of Saxen Gotha, guests of Pallavicini as well, attended the concert together with the bolognese nobility and religious leaders: the archbishop Vincenzo Malvezzi, the cardinal legate Antonio Colonna Branciforte and monsignor Ignazio Boncompagni Ludovisi. The count, prideful of the evening, March 28 wrote to the minister Firmian of the event: “I held Monday evening at my house a conversation with 70 ladies to which Mr. Cardinal Legate, Mr princes of Holstein, and almost all the nobility came, and the young professor proved his admirable knowledge that at his tender age appeared to be incredible to those who couldn’t see him…” The Salzburg boy came with his father Leopold march 24, and Gian Luca, connoisseur, didn’t miss this opportunity. The Mozart family was his guest on several occasions: in march in Via San Felice, during the summer in Villa della Croce del Biacco and again, in autumn, in the city palace where the antiphons Cibavit eos, Quaerite primum regnum Dei and in all probability the minuet in E flat major k 94 were created.
Mozart could meet the renowned masters of European music: Mislivecek, Vanhalle, Farinelli, the musicologist Charles Burney (“I met the young famous German… in Prince Pallavicini’s palace”) and in particular Padre Martini, and his stay in via San Felice renovateed the city musical taste. “In Pallavicini… on the terrace there were several musicians playing delightful symphonies” (M.Oretti)

In the halls of Pallavicini residence chapters of international history and concluded significant diplomatic relations have been written. Main politicians of that time came here: in 1768 the young princess Maria Carolina of Hapsburg stopped in Bologna, to beaccompanied to Naples by the marshal to meet Ferdinando of Bourbon her future husband. Also the gran duke of Tuscany Pietro Leopoldo of Lorraine with his wife Maria Luisa of Bourbon of Spain were the marshal’s guests and in 1769 the Austrian Emperor Giuseppe II too. Travelling to Rome for his contacts with the Holy See, the Emperor stayed in via San Felice march 13 and 14, 1769, he was entertained with chamber music concerts by Giuseppe, Gian Luca’s son, and played again using the harpsichord in 1771 for an “entertainment” in music for princes of Holstein and Saxen Gotha.
The renowned Farinelli, Pallavicini’s friend, entertained the evenings of the distinguished guests and each time the palace became stage of celebrations worthy of a European court. Memorable, in 1775, the “barbarian horse” race organized along via San Felice for the arrival of the archduke Massimiliano.
Also the housing of an Austrian regiment in Via del Pratello, the German servitude, the Lipizzan stallions purchased for the young count Giuseppe witnesses the international range of the palace, as well as its decorations. Unique of its kind the painting with the L’iperatrice Maria Teresa d’Asburgo come Cibele Madre di tutti i popoli painted on the ceiling of a hall on the nobile floor between 1791 and 1792 from the bolognese Pietro Fabbri: an extraordinary work, not present in Austria or in territories of the emperor but exceptionally present in Bologna it is no coincidence that it was painted in the same year when the daughter Maria Antonietta was languishing in the temple prison in Paris.

THE YEARS OF GIUSEPPE PALLAVICINI

Having reached the age of maturity became the owner of the palace, Giuseppe Pallavicini (1756-1818) he planned new shipyards documented in detail by many family archive documents. The young count was educated better than a sovereign. He had as a teacher Carlo Bianconi, in contact with Algarotti and Giovanni Gioachino Winckelmann: the passion for the antiquity was in his blood. He therefore decided to change the palace in via San Felice in an avant-garde neoclassical shipyard of the highest level: the opportunity came in 1776 when they started to talk about marriage with Carlotta Fibbia. He involved the main characters of the artistic civilization of his time: the architect Raimondo Compagnini, the sculptor Giacomo Rossi, the “quadraturista” David Zanotti, and above all the figure painters Filippo Pedrini and Giuseppe Antonio Valliani. Beyond compare, in their extension, are the decorations in plaster made by Giacomo Rossi on walls of the wide “camerone” and “conviti” halls with a repertoir of candelabre à la greque. The pictorial decoration as well was committed to a remarkable team of artists, including Giuseppe Antonio Valliani and the figure painters Emilio Manfredi and Francesco Sardelli, whose works witness their taste for antiquity which repeats in several halls. Significant was the involvement of the bolognese painter Filippo Pedrini, author of two ceilings adapted in Vincenzo Martinelli’s landscapes: a tribute to the Pallavicini merchants origins. Serafino Barozzi painted instead the garlands of flowers that climb walls of “Conviti” hall, the same ornamentations made in the summer residence of Orianembaum for Caterina of Russia. The neoclassical shipyard of Pallavicini palace proceeded with the library, dedicated to the eighteen thousand volumes of count Gian Luca, when once again we meet a unicum in the bolognese painting, since the author of the library, the “quadraturista” Flaminio Minozzi, signed and dated “1792” the dome of the hall, a rare event in art history for a fresco.