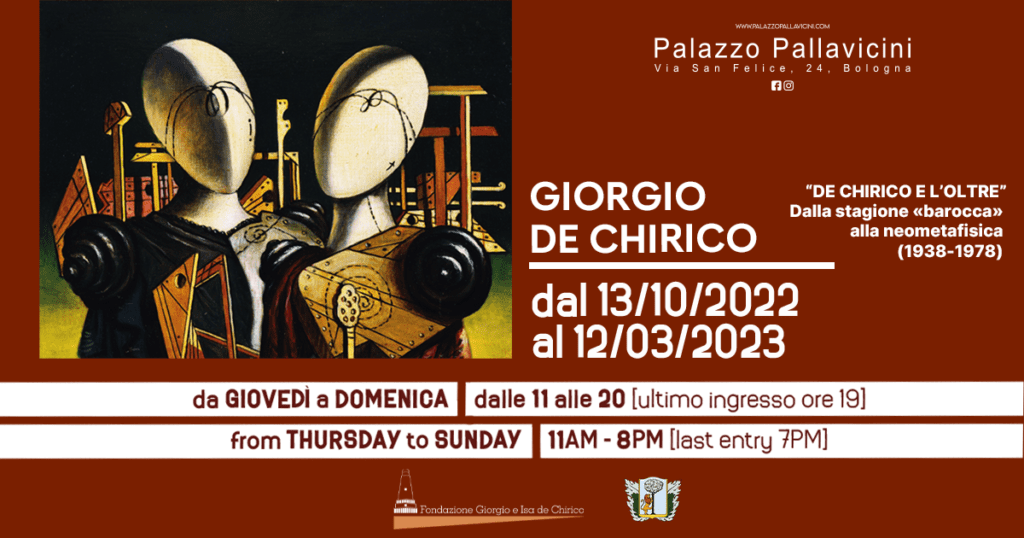 In Bologna from 13 October 2022, Palazzo Pallavicini hosts a large exhibition entirely dedicated to the father of metaphysical painting, Giorgio de Chirico. The exhibition entitled “De Chirico and the beyond. From the “baroque” to the neometaphysical season (1938-1978)” curated by Elena Pontiggia and Francesca Bogliolo, it is produced and organized by Pallavicini Srl of Chiara Campagnoli, Deborah Petroni and Rubens Fogacci in collaboration with the Giorgio and Isa de Chirico Foundation and collects a prestigious corpus of works by the painter among the most influential and recognized of the Italian twentieth century.

Special openings from 11am to 8pm (last entry 7pm)

The complete technical data sheet can be downloaded and viewed at the following link http://tgr.it/it/prodotti/jolly-ramp/

Tickets for the exhibition are available directly at Palazzo Pallavicini at the ticket office, in the following points of sale, or online by clicking the “Buy ticket” button

The exhibition includes over seventy works from the Giorgio and Isa de Chirico Foundation in Rome and reconstructs two important moments in de Chirico’s painting: the “baroque” season and the neo-metaphysical season.

The first developed from 1938 to 1968, when de Chirico (who in 1939 left Paris and returned to Italy, dividing between Milan and Florence, before moving permanently to Rome) was inspired by Rubens and the great masters of the caliber of Dürer, Raphael and Delacroix. His works, which are not realistic, want to create an ideal and unreal world, a fiction truer than the truth: “we love the untrue”, and again “reality cannot exist in painting because in general it does not exist on earth”, writes de Chirico himself. The “baroque” works behind their apparent naturalism are still meta-physical (lit. “beyond nature”), they represent a metaphysics of nature, that is, a nature that does not exist in nature. On display are a series of important nude self-portraits, such as the famous Self-portrait of 1945 and the emblematic Self-portrait in the park with costume of the seventeenth century of 1956. Here the artist wears ancient clothes and measures himself with the masters of the past, declares his distance from modernity and rejects the dogmas of the twentieth century, revealing himself as the first post-modern artist. Other fundamental works of the “baroque” season are also exhibited, such as Ariosto’s still life, 1940; The figure skater, 1940 (the portrait of his wife Isabella as an allegory of winter); the Bucefalo terracotta, 1940 (one of the first examples of de Chirico sculptor); the Villa Medici series (exhibited in 1945 at the San Silvestro Gallery).

The exhibition tour continues with the neo-metaphysical season relating to the decade 1968-78, in which de Chirico returns to paint the emblematic mannequins, the squares of Italy and other enigmas, with new elaborations and inventions. A shift in motives and meaning from the nihilist vision of the 1910s. He reinterprets with irony and in more serene forms the themes of the past that are enriched with brighter colors, accentuated irony and playful tones, although some melancholy is not lacking. To the pasty painting of the “Baroque” season, it replaces a painting based on drawing and the sharp construction of forms and the exhibition documents this last season of the artist with some masterpieces such as Hector and Andromache, 1970; The sun on the easel, 1973; The mysterious baths, 1974; The disquieting muses, 1974; Metaphysical vision of New York, 1975

Giorgio de Chirico was born in 1888 in Volos in Thessaly, from Evaristo and Gemma Cervetto. His brother Andrea, the future Alberto Savinio, was born in 1891. De Chirico completed his studies in Volos and at the Athens Polytechnic. In 1906, after the death of his father, he moved to Munich, where he studied until 1909, when he moved to Milan. In March 1910 he settled in Florence where in the summer-autumn he painted his first metaphysical works. In 1911 he moved to Paris and exhibited his metaphysical works for the first time at the Salon d’Automne in 1912. Meanwhile he met Apollinaire, Picasso and his first dealer, Paul Guillaume. When Italy joined the war, he was sent to Ferrara, where in 1917 he was admitted in the military hospital of Villa del Seminario. In the Ferrarese period he painted the first metaphysical interiors and the famous painting The disturbing Muses. His metaphysics profoundly influenced the Surrealists, who, however, disown him not accepting the artistic production of the Master after 1918. In 1919 he moved to Rome, where he collaborated with the magazine “Valori Plastici”. In 1925 he settled again in Paris with Raissa Kroll, to whom he remained linked until 1931, when he joined Isabella Pakszwer. In 1936-1937 he lives in New York. In 1938 he returned to Italy and settled temporarily in Milan, before moving to Paris and Florence during the war years. Starting from the same period he gave life to his “baroque” season, inspired by the great masters of the past such as Rubens, Tintoretto, Delacroix and Renoir. In 1944 he settled permanently in Rome. Between 1968 and 1978 he gave life to a reinterpretation of metaphysics in a playful, luminous and innovative key. Giorgio de Chirico passed away in Rome in 1978. Since 1992 his remains have rested in the crypt of San Francesco a Ripa Grande in Trastevere, the first Franciscan church in Rome.

The exhibition is accompanied by an extensive catalog published by Silvana Editoriale, with texts by Francesca Bogliolo, Mauro Pratesi and Elena Pontiggia, to which is added an important contribution by Renato Barilli testifying to the insight dating back to 1973-74 on the value of Neometaphysics.

The Foundation was established in 1986 by the will of Isabella Pakszwer Far, widow of the artist, and of Claudio Bruni Sakraischik, curator of the General Catalog (1971-1987), with the aim of protecting and promoting the artistic and intellectual work of Giorgio de Chirico.

In 1990, on the death of the widow, the Foundation inherited the Master’s house, most of his artistic heritage and personal archive. In 1993 it was recognized as a legal entity and since then has been actively working in order to promote the creation of exhibitions and conferences, both in Italy and abroad, for the dissemination of the Master’s artistic and literary work; since 2002 he has edited the publication of the periodical magazine “Metafisica – Quaderni della Fondazione Giorgio and Isa de Chirico”, published in Italian and English, which presents and disseminates the studies conducted on Giorgio de Chirico, as well as original documents on the life and work of the Master (the articles of the magazine can be downloaded free of charge in pdf format from the Foundation’s website: www.fondazionedechirico.org).

In 1998, after a careful philological restoration, the Foundation inaugurated the Giorgio de Chirico House-Museum in Piazza di Spagna, 31 in Rome.

Originally from the fifteenth century and belonged to several noble families, it is spread over an area of about 2000 square meters. Adorned with incredible frescoes and splendid stuccos, it was renovated in 1680 and has a monumental entrance staircase designed “in the manner of senatorial architecture” perfectly preserved. It was an important European court and the home of Count Gian Luca Pallavicini, leader and minister of Charles VI of Habsburg and his daughter, Empress Maria Theresa of Austria, mother of Marie Antoinette. In the Music Room, on March 26, 1770, a very young Wolfgang Amadeus Mozart performed.